With winter on its way, everyone is scrambling to collect their favorite recipes to warm themselves up from the inside out. So I decided I’d share with you today a favorite that has been passed down from my mother: cream of pumpkin soup.

While my mother’s cream of pumpkin soup was good, I think the dairy-free version I make is even better. Coconut cream is a miracle for anyone who avoids dairy, or can’t properly digest it. It tastes just as good, if not better than traditional dairy in almost any recipe that uses it.

Pumpkin is also a wonderful fall squash as it is in major abundance right now, and will be throughout all of winter. That means it is cheap, accessible, and just waiting to be made into a creamy pumpkin soup.

You can roast your own pumpkin in the oven for this recipe, or opt to use canned pumpkin. Roasted pumpkin will (very obviously) have more flavor, but if you’re short on time, canned pumpkin is a close second (especially if purchased organic).

Roasting squashes or root vegetables will slightly caramelize them as the natural sugars come out during the roasting process. This also adds an incredible richness that you simply can’t get just from using a can of pumpkin.

Another great thing about this soup is that it is naturally anti-inflammatory. While I did add some turmeric to up the ante, many people aren’t aware that pumpkin and coconut are anti-inflammatory on their own, too!

The three main ingredients that will really enhance your health are as follows:

Orange-hued fruits have incredible inflammation-fighting properties thanks to their antioxidant-rich carotenoid pigments that give them their rich color. Having too much inflammation in the body can lead to conditions like digestive complaints, mood swings, chronic fatigue and even diseases like cancer, diabetes and heart disease.

Pumpkins are great, because they contain antioxidants like beta-carotene, lutein, phytosterols, and unsaturated fatty acids that make them powerful at eradicating inflammation at the source.

Eating antioxidant-rich foods like pumpkin improve the free-radical scavenging activity of your body, which means less disease, more energy, and a clearer mind.

Coconuts contain a lipid called auric acid, and many researchers believe that lauric acid helps support the immune system. Some studies have even found that lauric acid possesses antimicrobial and anti-inflammatory properties.

Coconut is also a great antibacterial, and has over 150 uses for internal and external body care as well as around the home.

If you don’t already know, turmeric is a beast at fighting inflammation. As long as it is combined with a fat and black pepper (exactly what this recipe includes), then the absorbability rates will be largely improved.

Studies have found that when tested against a wide range of standard pharmaceutical drugs designed for pain relief, curcumin (the active component of turmeric) beat them all. They found that curcumin was perhaps one of the best anti-inflammatory supplements out there.

The anti-inflammatory benefits of turmeric also extend to wound-healing, managing sciatic nerve pain, post-operative pain, as well as arthritis and other joint pain.

This cream of pumpkin soup would make the perfect meal for when you’re craving a comforting, satisfying lunch (or even dinner). You can even substitute the pumpkin for butternut squash if you want something a little sweeter. If you add more turmeric, you’ll double its anti-inflammatory effects, and if you want to cut the fat a bit, you can do so by subbing more vegetable broth in place of some of the coconut milk!

If you try the recipe, let me know in the comments below. Don’t forget to take a photo and tag #livelovefruit on Instagram! 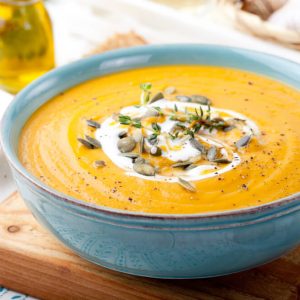 This delicious warming recipe is extra-creamy and has hints of fall infused in each bite. It is quick to make and let's be honest – who doesn't want cream of pumpkin soup?!
Print Recipe Pin Recipe
Total Time 30 mins
Course Soup
Servings 6 servings
Calories 167 kcal

My favorite brand of coconut cream is the brand “Real Thai”. In Canada, it can be found in the ethnic/world section at The Real Canadian Superstore.
Keyword christmas, fall, pumpkin, quick, soup, thanksgiving
3.9K shares