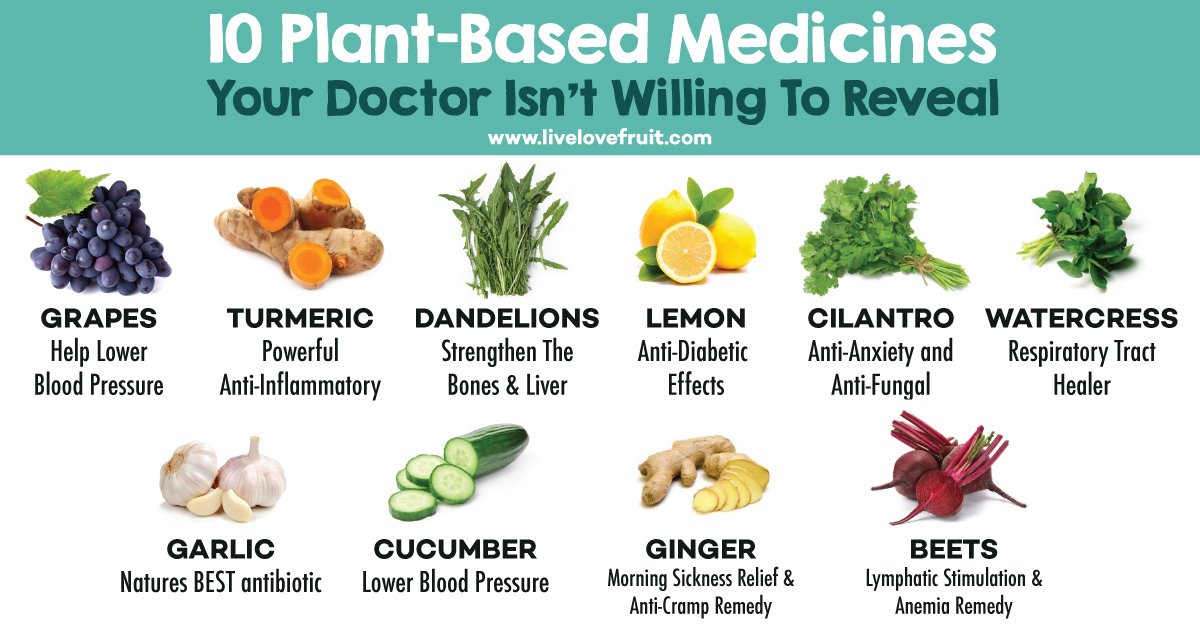 Hippocrates once said, “let food be thy medicine, and let medicine be thy food.” He was right. There are many plant-based medicines that we are surrounded by, but yet we don’t realize their full potential. What if I told you that the dandelions in your back yard could help cure your liver problems, and lower your blood pressure?

With medical schools neglecting nutrition education, it is no wonder that doctors aren’t even aware of the miracles and cures that plant-based foods can provide. Even if they were aware, they probably wouldn’t reveal these natural remedies to their patients, because they get paid by pharmaceutical companies to use their drugs.

Taking care of your health begins with you, and with you only. As I always say, “Eat Vibrantly, Live Vibrantly!”

Here are 10 plant-based medicines your doctor isn’t willing to reveal:

Could replace: blood pressure medications like Lisinopril and Norvasc (i.e., Zestril) and diuretics like Esidrix or Zaroxolyn

Grapes do more than just taste good. The skin of grapes contain a beneficial compound called resveratrol that has been found to reduce blood pressure in hypertensive patients. Grapes are also natural diuretics, and so they help the body get rid of excess sodium (salt) and water, which naturally helps lower blood pressure.

Could replace: non-steroidal anti-inflammatory drugs like ibuprofen (Advil and Motrin), hydrocortisone and Tylenol

Turmeric is one of the best all-natural anti-inflammatories, which also means it is one of the best natural substances to help alleviate aches, pain and swelling. It has been used for centuries to treat inflammatory conditions like arthritis, osteoarthritis and rheumatoid arthritis. One study even found curcumin (the active ingredient in turmeric) to possess the ability to inhibit the activity of COX-2 enzymes, a major enzyme involved in the inflammatory response.

Turmeric’s anti-inflammatory and anti-arthritic effects have even been equated with that of the popular pharmaceutical anti-inflammatory drugs like Motrin and hydrocortisone (but of course, without all the nasty side effects those drugs induce).

Could replace: drugs that help strengthen bones like Fosamax, and Boniva, liver medications and blood pressure medications like Lisinopril and Norvasc (i.e., Zestril)

Dandelion greens are some of the best to help strengthen the bones and teeth, and help detox the liver. Dandelions provide the body with 535% of the recommended daily value of vitamin K, which means that it is one of the most important plant-based sources to help strengthen bones. Vitamin K is needed for improving bone density – individuals who are low in vitamin K, often suffer from higher risk of fracture. It keeps bone mineralization in balance and helps raise osteocalcin, which controls the building of bone.

Lemon is another not-often-spoke-of natural medicine that helps dissolve mucoid plaque in the arteries and veins, and helps lower blood pressure. In 2010, a study published in the “Journal of Basic and Applied Sciences” found that lemon juice can help lower total cholesterol, triglycerides and low-density lipoprotein (LDL – the “bad” cholesterol) while increasing high-density lipoprotein (HDL – the “good” cholesterol).

Lemon also stimulates the lymphatic system, helping to flush out toxins, as well as tone our cells and get rid of fat deposits that contribute to cellulite. Try drinking lemon in your water every day!

Could replace: a variety of drugs – this herb is a major detoxifier, and helps many issues!

If you’re suffering from swollen breathing passages in the lung, coughs, or bronchitis, watercress may be just the herb for you. It acts as an anti-inflammatory, helping reduce inflammation and clear breathing passages. It helps to clear heat, and lubricate the lungs, and has even been found to be an effective chemopreventative agent against lung cancer induced by tobacco-specific lung carcinogens.

This powerful little herb purifies the blood, and stimulates the lymphatic system as well, contributing to overall health and wellness.

Ginger is another great anti-inflammatory rhizome that helps relieve PMS and improve circulation. The anti-inflammatory compounds in ginger called gingerols help alleviate pain in those suffering from arthritis and helps women who experience painful menstrual cramps.

If you or someone you know suffers from morning sickness, then ginger is your miracle cure. Studies have found that with 125mg of ginger extract (equivalent to 1.5g of dried ginger) given four times a day for four days significantly reduced nausea in women less than 20 weeks pregnant who had previously experienced morning sickness daily for at least a week. The placebo group (given a placebo) had no reductions in nausea. This effect was found after the first day of treatment!

Cucumber and celery are both strong diuretics. They encourage the flushing of excess toxins and salt from the body by stimulating the kidneys and increasing urine output. Because these two vegetables help the body get rid of excess sodium (the main reason so many people have high blood pressure – also because of excess fat intake), they also help control blood pressure.

Not to mention, cucumber is high in silica, which beautifies the hair, skin and nails. Quite the bonus if you ask me!

Garlic is natures best, and most powerful antibiotic. Most drug-synthesized antibiotics (like Amoxicilin) inhibit the bacterium’s cell-wall-building mechanism, so that it can no longer replicate. However, these antibiotics also inhibit protein synthesis of the good bacteria needed by our bodies for proper immunity and digestion.

Garlic contains thiosulfinates, which possess strong antibiotic activity. It also contains a compound called diallyl sulfide, which has been found to be over 100 times more effective than two popular antibiotics in fighting intestinal infections.

Beets are one of the best foods you could eat to help build your blood and improve your iron stores. Beets are high in iron, which helps to regenerate and reactivate our red blood cells, supplying fresh oxygen to the body. Conveniently, beets also contain copper, which works together with iron to make it more readily available to the body.

Beets contain an amino acid called betaine, which helps dissolve inorganic calcium deposits in the arteries, helping to lower blood pressure and reduce your risk of developing atherosclerosis. Not only that, but beets help thin the bile (which is responsible for about 80% of the immune response in the gut) and stimulate the lymphatic system.