Category: > Remedies > These 10 Natural Remedies Will Help Grow Back Your Receding Gums In No Time
7.2K shares 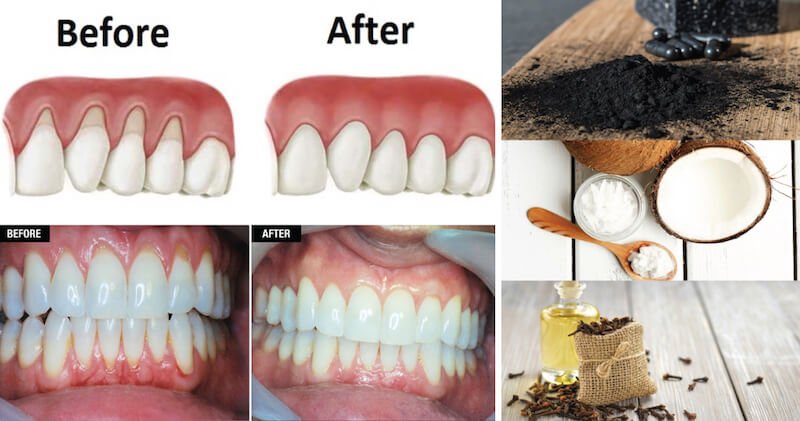 Do you suffer from receding gums? And if you do, did you know that there are many natural remedies that help grow back your receding gums in just a few weeks?

Receding gums are basically just that – gums that have receded. It occurs when the gum tissues around your teeth wear away, and the gums recede backward. This exposes a larger surface area of your tooth, which can lead to problems like bacteria build up and tooth pain and sensitivity.

You can even lose teeth if your receding gums get really bad – the damage inflicted on the supporting tissue and bone structures of your teeth will be compromised, and can lead to this scenario.

It takes time for your gums to recede – it isn’t something that happens overnight. If you have really sensitive teeth, receding gums could be the problem. If your teeth also appear larger (because more of them are exposed) than they were a few years ago, it is also likely that you have receding gums, and should get to treatment right away (naturally, of course!).

Here are some symptoms of receding gums:

• Gum diseases: gum diseases like periodontal disease, where bacteria infect your gums, damage the gum tissue and your teeth’s supporting bone. This leads to gum recession and other problems.

• Genetics: if receding gums are common amongst your families lineage, it may be a genetic issue. Over 30% of the population is predisposed to gum disease, no matter how well they take care of their teeth.

• Poor dental hygiene: if you’re one of those people who don’t like to brush or floss regularly, then you’ll end up with lots of plaque on your teeth, which can then turn to tartar. This hard substance may cause gum recession.

• Hormonal changes: in regards to women, hormone levels change around puberty, pregnancy and menopause. This can make gums more sensitive and vulnerable to gum recession.

• Tobacco: smoke or chew tobacco? Your gums aren’t going to look too healthy. People who use tobacco have sticky plaque on their teeth, which is hard to remove. This can cause gum recession.

• Grinding and clenching your teeth: this will put a lot of force on your teeth, which can cause gums to recede.

• Piercing your lips or tongue: we all know the tongue and lip piercings can mess up your teeth. Jewellery rubs the gums and irritates them until the gum tissue is worn away.

You CAN Grow Back Your Gums!

Thankfully, you can grow back your gums. Eating a plant-based diet and treating your teeth with the following natural remedies will have your teeth back in shape in no time.

Here are 10 natural remedies that will help your receding gums grow back:

Oil pulling is incredibly beneficial for the gums and teeth. It is antimicrobial and helps protect against disease causing bacteria and germs. It also helps prevent food particles from sticking between the teeth. I like to make a toothpaste of coconut oil, baking soda, and a little bit of peppermint oil. You can also oil pull with coconut oil or sesame seed oil for 20 minutes, spit out, and then brush teeth as you would normally do.

You can rub vitamin C powder on your gums to help them recover. Use in the form of calcium ascorbate, that way it won’t sting when you apply to the gums. Spread on the gums and rinse after a few minutes. Taking vitamin C supplements and upping your fruit and veggie intake will also help increase vitamin C concentrations in the body.

Aloe vera is incredibly anti-inflammatory and has many repairing capabilities. It will help repair gum tissue, and prevent infections such as those caused by bacteria that stick to the teeth. You can use aloe vera gel like a mouthwash, or for brushing your teeth.

Eucalyptus essential oil destroys germs and bacteria that live in your mouth. It’ll protect you from oral diseases and helps reduce swelling in the gums (major anti-inflammatory!). Dilute this essential oil in some water to prevent any adverse reactions. Take 1-2 drops of eucalyptus essential oil in 1-2 tbsp. of water, and dip your toothbrush in this solution and brush. Wash your mouth with water, and voila! This will stimulate the growth of new gums (you can find the study here), and prevent receding gum lines altogether.

Do you drink green tea? Drinking 1 cup a day has a huge benefit for our teeth and gums. It is full of antioxidants, like catechins, that fight free radicals that cause periodontal disease, which can lead to receding gums. Catechins strengthen the connection between the gums and teeth and also reduce swelling of the gums.

Powdered myrrh mixed with a little bit of water to form a paste can be used as a treatment before brushing your teeth. Resin from the myrrh tree is used for curing and treating different gum and mouth diseases. It helps prevent damage to the gums and reduces gum line recession.

You can also combine 1-2 drops of clove oil with a little bit of coconut oil and massage on your gums. Doing this 3 times a day can dramatically improve the health of your gums. The most common use of clove oil is to prevent toothache. It destroys germs and bacteria in your mouth and fights against oral disease. It also reduces gum swelling.

Hydrogen peroxide in your mouth?! It’s okay! Hydrogen peroxide is actually a great remedy to improve the health of our gums and teeth. It only consists of water and oxygen. It is a germicidal agent that oxidizes disease organisms and kills them! 3% hydrogen peroxide diluted with a little bit of water makes an effective mouthwash, and can be used with baking soda as a toothpaste. Just make sure you spit it out and don’t swallow!

Lemon oil is highly antiseptic and makes a great anti-bacterial agent. Lemon helps stimulate the growth of the gums, and prevents gum disease in general. Lemons are acidic, however, when they first enter the mouth, and so too much of the oil on your teeth can actually destroy your enamel. Doing this once a week should be plenty. Mix 1/4 cup olive oil with the juice of 1/2 a freshly squeezed lemon. Mix, and leave the mixture for a couple weeks. Shake the jar every day, and after 3-4 weeks you can start to use the oil. Massage the gums with this mixture for a couple minutes, and be sure to brush afterward.